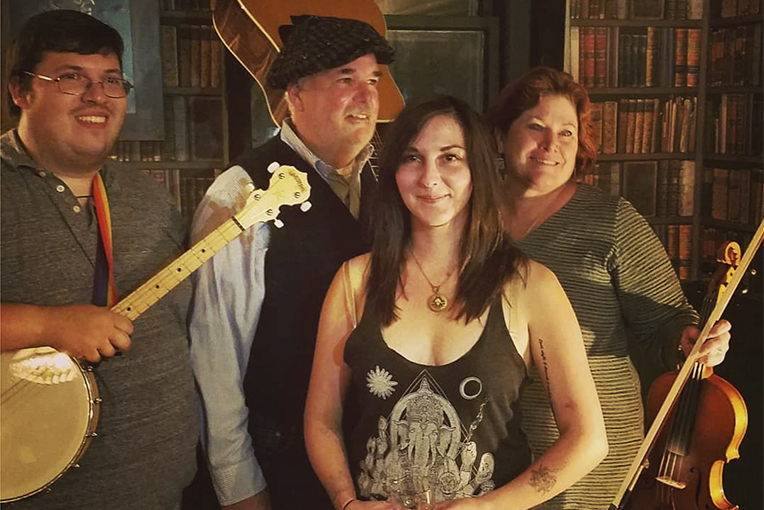 O'hAnleigh is Irish-American music that hits home all over the world. These four multi-instrumentalists from Vermont tour throughout the northeast and abroad with killer harmonies, sing-along pub songs, award-winning original story-songs of Irish myths and legends, and sizzling fiddle tunes, bringing a fresh twist to the realm of Celtic folk music.

From classic Gaelic ballads to rollicking pub songs, Irish-American tin pan alley tunes to traditional dance sets, songs of rebellion to songs of love and loss, OhAnleighs vocal talents combine to create the unique OhAnleigh sound, supported with a dazzling array of instruments including 6 and 12 string guitars, bouzouki, mandolin, bass, fiddle, tenor banjo, penny whistles, harmonica, bowed psaltery, dulcimer, autoharp, bodhrans, bones, spoons, and a whole assortment of other small percussion, much of it hand-made out of odd bits of things found in the garage to get just the right sound for a particular song. O’hAnleigh’s playlist numbers in the hundreds, including a hearty dose of rebel tunes and a growing list of original pieces, as the band composes music and lyrics to expand the Irish-American folk genre. Their performances are noted for the rapid-fire pace of their song list, as well-rehearsed instrument changes and dramatic or humourous pieces of the spoken word (Irish poetry) blend one song into the next for a non-stop set of musical energy. Tom Hanley, a second-generation Irishman descended of immigrants from Counties Laois and Roscommon, performed with bar rock bands since the early 1970’s. When asked by a social organization to perform some Irish music at a St. Patricks Day event in 2002, he enlisted his then 12-year-old daughter Becca, counting on her ethereal soprano to evoke visions of Ireland past. For the next year, Tom and Becca performed at fairs, Irish clubs, farmers markets, and social events.

In early 2003, fiddler Cindy Hill joined the father-daughter team. Cindy’s ancestors hail from Counties Tyrone and Limerick. Her musical credentials range from school orchestra, band, jazz band and chorus including being selected for New York State’s all-state jazz bands, orchestra and chorus, to a succession of party rock bands, and her interest in traditional Celtic music sprang from her long political activism in the Irish independence movement. Cindy ran a weekly hands-on music program for developmentally disabled adults in Chittenden County, Vermont, in 2008-2009. Cindy brings a knowledge of Celtic mythology and legends to the band along with her multi-instrumental talents. In 2019, Matt Bean, a veteran of Mark Sustic’s Fiddleheads program and Vermont bands from Trinity to Longford Row to the Cop Outs, joined forces with O’hAnleigh, adding to the band’s vocal harmonies, fiddle tunes and array of other stringed instruments. Songwriting duo Tom Hanley and Cindy Hill were runners up in the International Songwriting Contest in 2005 for their ballad “Town of Strabane”, which recounts the story of a faerie tree in Cindy’s ancestral home of Strabane, as related to Cindy Hill by SDLP co-founder Paddy O’Hanlon when he was touring Vermont sponsored by the Burlington Irish Heritage Festival. Hanley/Hill also took second place in the 2018 Grassy Knoll Songwriting Contest for their pieces “Dance” and “Avalon”. In addition to pubs, festivals, weddings and themed events like Renn Faires, Civil War encampments and Steampunk events, the band frequently entertains elders with sing-alongs and interactive performances of music from the 1880s to 1920s. We delight in getting smiles on faces as they remember the songs their mothers sang when they were young. O’hAnleigh also often leads workshops on pennywhistle basics, spoons, bones and bodhran. O’hAnleigh’s premier CD “Of Irish Crossings Told” featuring Celt classics like Black Velvet Band and four all-original pieces is playing in over 32 countries, generating rave programmer and listener reviews (review clips below). O’hAnleigh’s second CD, “Farewell Roscommon” is seeing increased digital distribution as O’hAnleigh moves into new global music markets. Their third and fourth CDs, “Winds of Change” and “Come to the Faire” were released in 2019, and brought their original and authentic immigration-era music on tour in England. Their fifth disc, “Faerie Tales” was also released in 2019, featuring two new children’s songs and a selection of story-song favorites from their other albums. All profits from Faerie Tales are donated to the Vermont Fairy Tale Festival, a family literary event sponsored by the Vermont State Libraries. *end*